Nimbus (https://nimbusforwork.com) is an interesting company because we are operating in a very non-tech industry (cleaning). This has made it easy to be disruptive, however it also presents some unique difficulties for the products. Namely, cleaners are not very tech-savvy. Because of the lack of tech sophistication, we made a decision to be very deliberate before presenting changes and new features to our cleaners.

Surprisingly, without the "next feature fallacy" mentality we have been able to push out more products with less people. The mentality has instead morphed into "slow is smooth, smooth is fast". Our current tech team consists of one full timer (me) and one intern (working two days per week) who is in his second year at university.

We did a lot of prototyping at the start of Nimbus, mostly quick and dirty web products and also a surpisingly successful Telegram chatbot. Now we have arrived at three relatively stable products - two mobile apps and a web interface. 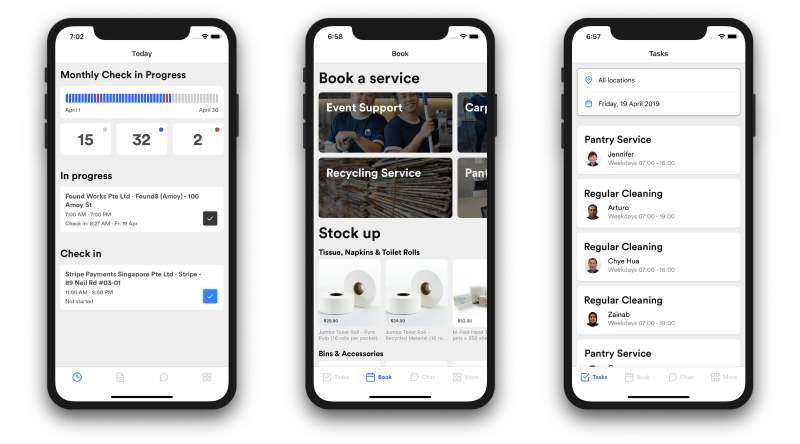 Crew app on the left, Customer App in the center and right

An app for our crew to check in & out of their shifts, see their payslips, apply for leave, chat to their colleagues, and track attendance bonuses. It's also for our "on the ground" managers to monitor the staff from anywhere and make quick changes whenever there are problems.

An app that allows our customers to see when cleaners, temp staff, and contractors are arriving and leaving, book new services (ad-hoc cleaning, event support, pest control etc), chat to Nimbus staff and managers, and pay their invoices.

"HQ" is a web admin interface that allows our team to manage everything and quickly fix any operational problems (when it comes to people, there are always problems). This includes reassigning workers each day, seeing an overview of the schedule for the month, seeing who is late, and all the usual account set up. 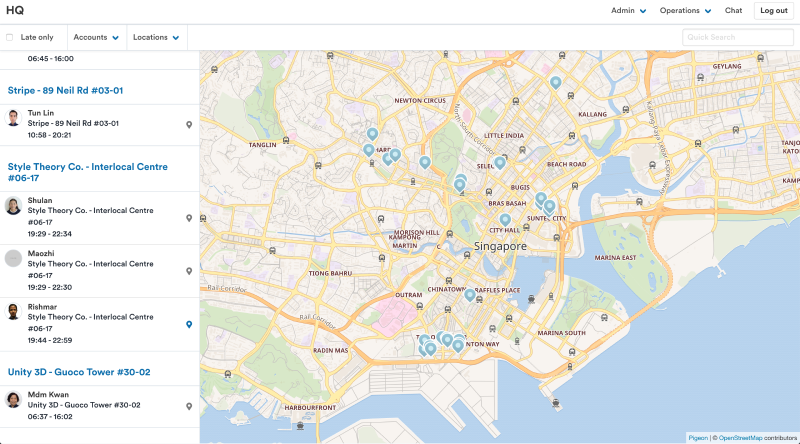 Before detailing the tech stack it's worth pointing out the guiding principle I used (and continue to use) in the decision making process. The overarching goal is this:

Reduce the number of developers we need to hire.

In the past I've fallen for the "hire fast, fire fast" mentality and it didn't serve me well. It's bad for culture and bad for the bottom line.

We have been able to achieve high output with less people through several methods:

Number 2 and 3 are hard to achieve while still maintaining speed and stability. At Nimbus they have been largely satisfied because of the following:

Using Postgres is almost cheating in 2019. It's robust, well supported by tools (which you'll see is important in the next section), works on every major cloud provider, and stores JSON for anytime you need to prototype something like you would using a NoSQL database. It also has a NOTIFY/SUBSCRIBE feature where you can attach listeners to table changes (also important soon).

The Firebase database is my worst decision to be honest. We needed something for our chat that could support all the functionality of whatsapp (especially voice messages). I ruled out a lot of "Chat as a Service" providers because I thought Firebase would give us the flexibility that we required. Unfortunately I used their latest database, Cloud Firestore (their recommendation), and it's simply too slow and too limited (e.g. querying across subcollections). Luckily you can attach serverless functions to Firestore CRUD events so we'll use this to as a way to replicate the data into our Postgres database - eventually removing Firestore completely.

My favourite piece of opensource software is PostgREST (not to be confused with Postgres). Simply start a server, install PostgREST, point it towards your Postgres database, then never touch it again. This gives you a fully-fledged, well tested, and high performace API. Hell, you can even query foreign relationships in one request, just like you would with GraphQL. Security can be pushed all the way down to the database level, and since Postgres has Row Level Security you end up with a API that's pretty damn good. Much better than any I can build myself.

For anything that requires custom logic, we use Serverless functions (mostly AWS Lambda, written in JS). This is where Serverless really shines - small tasks and fringe cases where it wouldn't make sense to spin up a full server. Our typical use cases are integrations with external providers (e.g. Xero) and building data pipelines.

We have a Phoenix (Elixir) server that is used for anything realtime, as well as our database migrations.

Although React and React Native aren't 100% compatible, we have managed a lot of code sharing. Even without full compatibility the biggest win is that they are conceptually the same - our intern is now very good with React Native so I'm comfortable that he can help with our web product too. The same could not be said if I had to hire a Swift developer.

Now comes the interesting part. I have already mentioned some things like compile-time validation to reduce "meta-programming". But that's not where the real time savings are found. There are two areas where they are:

This one is quite obvious.

We have a git repository called nimbus-expo which is shared across our two React Native apps. This contains all the common Expo UI components.

We have another git repository called nimbus-utils that we share across all of our products. This includes helpers, libraries, and common Javascript code. For example, we use MobX for State Management in all three products, so each product has a shell rootStore.js which imports whichever "substores" it needs from nimbus-utils.

This can only be done because I have foregone any temptation to use other languages. I find that I am often refactoring these submodules to reduce the amount of code in them. If you're going down this path it's important to design your code for reusability - in particular you'll want to study up on both the Actor Model and Dependency Injection to ensure your libraries are largely standalone and decoupled.

This was a concept that I got from using PostgREST. I became enamoured with the idea that I could make changes to the database and then get free API updates "out of the box". So I started investigating whether I could do the same with our web product.

PostgREST automatically generates an OpenAPI spec, so my first attempts leveraged this with great success. I combined the spec with react-jsonschema-form to generate fully-validated forms which could create and update our database via PostgREST.

There were a few limitations with displaying and ordering of the fields so I recently forked and improved a library which will allow me to inspect our database and create a more robust JSON Schema. It's still early days, however we are moving towards a product that utilises the following developer workflow:

As an added bonus, our products are all kept in sync in realtime. To achieve this, whenever data changes in the database, Postgres creates a NOTIFY event for any insert/update. Our Phoenix server listens to the changes and "shouts" the updates to anyone connected to it via websockets.

We don't have any conflict resolution when users are editing the same row at the same time, but it's a fringe case that doesn't warrant engineering time.

This whole setup isn't too different that something like Django Admin (which I really like). In this case our "ORM" (the schema) is decoupled from the framework so we can create some very customised pages when we need to.

There are a few tools and practices that I have left out for the sake of simplicity but they are worth mentioning to wrap up:

← How to throw a boomerang Augmented Reality →